The legend that is Brian Wilson will be performing at Tanglewood Music Center on Sunday 16th June 2019! The iconic performer and former Beach Boy will be playing a wide variety of songs from throughout his entire career on his Greatest Hits Tour, so get ready to sing along to some mega hits and pick up the Good Vibrations! Tickets available now! 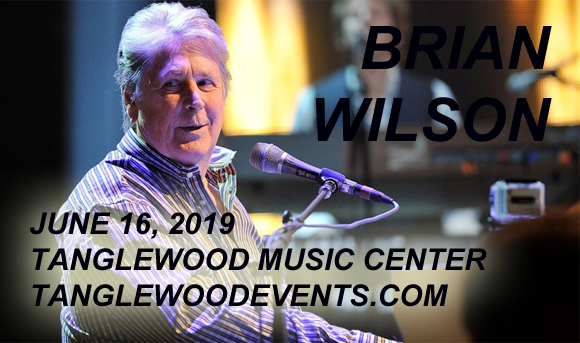 Regarded by many as one of the world's greatest and most influential songwriters, Brian Wilson is an American musician, singer, songwriter and record producer, and co-founder of the Beach Boys. Wilson wrote, or co-wrote, over two-dozen Top 40 hits for the Beach Boys and was the first pop artist credited for writing, arranging, producing and performing his own material. An innovative producer, Wilson was the first artist to use the recording studio as an instrument in its own right and has been credited for originating the California Sound, which was responsible for influencing the creation of the "sunshine pop" and Flower Power music of the 1960s. Wilson was inducted into the Rock and Roll Hall of Fame alongside the Beach Boys in 1988, the Songwriters Hall of Fame in 2000 by Paul McCartney who referred to him as "one of the great American geniuses", and the UK Music Hall of Fame in 2006 by Pink Floyd guitarist David Gilmour. He has also won two Grammy Awards from nine nominations. Wilson released twenty nine studio albums, eight live albums, fifty five compilation albums and seventy one singles with the Beach Boys, and he has released eleven albums as a solo artist.