Virtuoso guitarist and jam-band phenomenon Trey Anastasio comes to Tanglewood Music Center on Friday 18th June 2021 as part of his "Evenings with Trey Anastasio" series, where he will be performing a broad range of his songs and compositions alongside the renowned Boston Pops Orchestra! Needless to say, Anastasio has a vast and exciting repertoire to draw from, with his own solo work, Phish songs and material from Bivouac Jaun, Bad Hat, Phil Lesh and Friends, SerialPods, Ghosts of the Forest, Oysterhead and Surrender The Air all vying for attention on what is guaranteed to be a mind-blowing set-list! A peerless musician and performer, Anastasio brings heart, soul and skill to every unique performance! 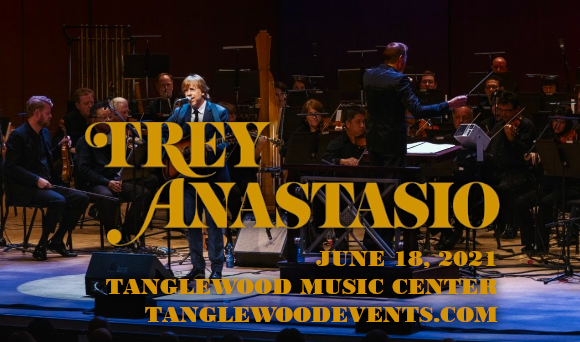 Trey Anastasio is jam band royalty. The American musician, singer, songwriter, and composer Trey Anastasio is best known as lead vocalist, guitarist and co-founder of the rock band Phish, and is the writer of over 150 of the cult favorite band's songs. Not only has he made a name for himself with Phish, but Anastasio has forged his path as a solo artist too, releasing 11 studio albums throughout his solo career, and performing numerous "Evenings with Trey Anastasio" tours that see him performing with a full symphony orchestra, and prove to be immensely popular year upon year. He is also a dedicated collaborator, and has played with the Phish-related projects Bivouac Jaun, Bad Hat, Phil Lesh and Friends, SerialPods, and Ghosts of the Forest. He is also the frontman of the alt-funk supergroup Oysterhead (alongside bassist Les Claypool of Primus and drummer Stewart Copeland of The Police) and free jazz ensemble Surrender The Air. Anastasio is also a noted composer, having written the score for the Broadway musical Hands on a Hardbody, for which he was nominated for a Tony Award for Best Original Score at the 67th Tony Awards in 2013. 2013 also saw him awarded the Dramatists Guild Frederick Loewe Award for best theatrical score composition.