One of country music's most prestigious artists, Reba McEntire, comes to Tanglewood Music Center on Sunday 1st September 2019! The multi-platinum-selling, Grammy Award-winning singer will be performing songs from her prolific, illustrious career, including many of her 26 Billboard Hot 100 number one hits! With endless charisma, incredible presence on stage and a back catalog of timeless songs, Reba is a true country music legend! 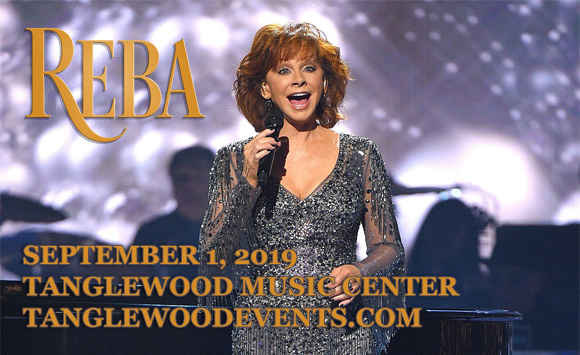 Upon moving to Nashville, Tennessee in 1975 following the advice of country singer Red Steagall, American singer, songwriter, actress and record producer Reba McEntire began her music career by signing with Mercury Records. McEntire released her self-titled debut studio album two years later, which was the first of six studio album releases with Mercury. However, it was her move to MCA Nashville Records, Mercury's sister label, that brought McEntire's music mainstream attention, and her 1984 album My Kind of Country launched two number one singles: "How Blue" and "Somebody Should Leave". A prolific artist, McEntire has released 29 studio albums to date, and has charted 42 number one singles and 16 number one albums. She is one of the best-selling artists of all time, having sold over 95 million records worldwide, and 28 of her 29 albums have been certified gold, platinum or multi-platinum in sales by the Recording Industry Association of America.