EVENT CANCELLED. Please contact your ticket point of purchase to claim a refund on your tickets.

Self-proclaimed "King of Valentine's Day" John Legend will be spreading the love at Tanglewood Music Center on Saturday 28th August 2021 on his Bigger Love Tour! With his velvety tones, “Sexiest Man Alive” looks (he's People Magazine's current reigning champion), and penchant for romantic lyrics, Legend knows how to set the scene for lovers, and will be thrilling audiences with a set of his most passionate songs, so get ready to feel the amorous vibes! The EGOT award-winning performer has an incredible back catalog of hits and absolute gems like his recent hit “Conversations In The Dark!” He'll be joined by special guest husband-and-wife act The War and Treaty in support! 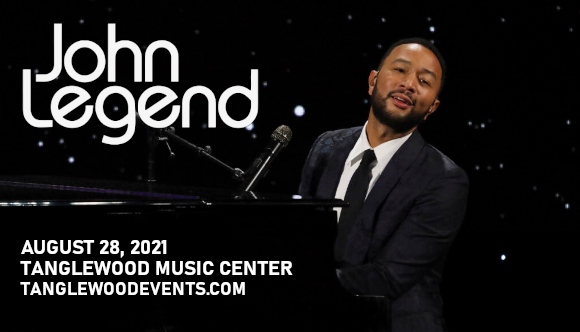 One of only 15 people, and the first black man, to have won an Emmy Award, a Grammy Award, an Oscar, and a Tony Award (EGOT), John Legend is a rare and special talent. The American singer, songwriter, producer, actor, and philanthropist found his way into the industry via working with a variety of established names – his first notable job was as a pianist on Lauryn Hill's 1999 hit "Everything Is Everything," and not long after he wrote for Jay-Z and Janet Jackson. His musical prowess was recognized by Kanye West, who signed Legend to his label. Next came the release of his debut album, Get Lifted, which was a worldwide hit and made the singer a household name, reaching number four on the Billboard 200 and winning him the 2006 Grammy Award for Best R&B Album, Best New Artist and Best Male R&B Vocal Performance for his single "Ordinary People". Get Lifted was the first of four top five albums on the Billboard 200 for Legend, launching numerous hit singles. The performer has diversified over the years, and in addition to winning eleven Grammy Awards for his music, he has written music for film (the Academy Award for Best Original Song and Golden Globe Award in 2015 for co-writing the song "Glory" from the film Selma), and has found a place in musical theatre, starring as Jesus Christ in NBC's adaptation of the Andrew Lloyd Webber/Tim Rice rock opera Jesus Christ Superstar, for which he was nominated for a Primetime Emmy, winning for his role as a producer of the show. He also won a Tony Award for co-producing Jitney for the Broadway stage, and in 2017, he took home the Hal David Starlight Award from the Songwriters Hall of Fame.