One of the world's most revered folk-rock artists, James Taylor, comes to Tanglewood Music Center on Thursday 4th July 2019 for the second night in a row for an “Evening With James Taylor & His All-Star Band”! The engaging and talented performer, who first made his name with his iconic cover of Carole King's "You've Got a Friend", has had a career of chart-topping singles over his lengthy career and continues to be an astounding live act! 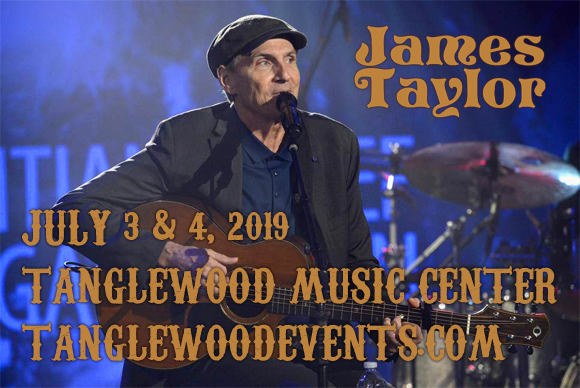 Five-time Grammy Award winning American singer-songwriter and guitarist James Taylor is one of the best-selling music artists of all time, having sold more than 100 million records worldwide. Despite being involved in the world of music since the early-1960s and signing to the Beatles' newly formed label Apple Records in 1968, Taylor's breakthrough came in 1970 with the release of the number three single "Fire and Rain", from his 1969 album Sweet Baby James, which is now hailed as a folk-rock masterpiece. His first number one single was 1971's "You've Got a Friend", written by Carol King and released on his third studio album Mud Slide Slim and the Blue Horizon (1971). Taylor's 1976 Greatest Hits album was certified Diamond and has sold 12 million US copies to date, and every album that he released from 1977 to 2007 sold over one million copies. His first US number-one album came in 2015 with Before This World, which is most recent release.