Virtuoso mandolin player and member of Nickle Creek and Punch Brothers, Chris Thile, comes to Tanglewood Music Center on Saturday 15th June 2019 for a live broadcast of his radio variety show Live From Here, accompanied by the Boston Symphony Orchestra!

"Live From Here with Chris Thile is a variety show broadcast on public radio stations across the country. Each week you can hear the best in music and comedy — with a world class house band, the Live from Here Radio Players, and special guests that range from longtime favorites to exciting new voices." 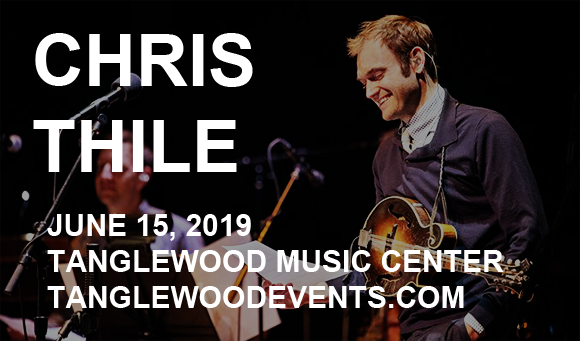 American mandolinist, singer, songwriter, composer, and radio personality Chris Thile was a child prodigy, first learning to play mandolin at the age of five. In 1989, at age eight, Thile formed the bluegrass trio Nickel Creek with siblings Sara Watkins (fiddle) and Sean Watkins (guitar), and was homeschooled over the years while the band toured. He released his debut solo album, Leading Off, in 1993 at 13 years old. Nickel Creek found huge success in 2000 with the release of their self-titled debut album, produced by Alison Krauss. The album was certified platinum and earned the band several Grammy and CMA nominations. They won a 2003 Grammy Award for Best Contemporary Folk Album with their fourth studio album, This Ride. Thile formed the progressive bluegrass band The Punch Brothers in 2006. Their fifth and most recent album, 2018's All Ashore, was awarded the Grammy Award for Best Folk Album at the 61st Grammy Awards on February 10th, 2019. Thile collaborative album with Yo-Yo Ma, Edgar Meyer and Stuart Duncan, 2011's The Goat Rodeo Session, also won the Grammy Award for Best Folk Album in 2013. To date, Thile has released seven studio albums, his most recent being 2017's Thanks For Listening.